Domo and Power BI are both BI market leaders. Which one is the best for your business?

Domo and Power BI are two of the most established market leaders in the business intelligence space. Both tools have widespread adoption throughout the business space and are fully featured, powerful tools for data analysis. However, they're not identical tools. Both tools have their own strengths and weaknesses that make them good fits for different companies. Businesses that want to invest in a BI solution should learn what makes the two tools different, so that they can invest in the tool that's right for them. 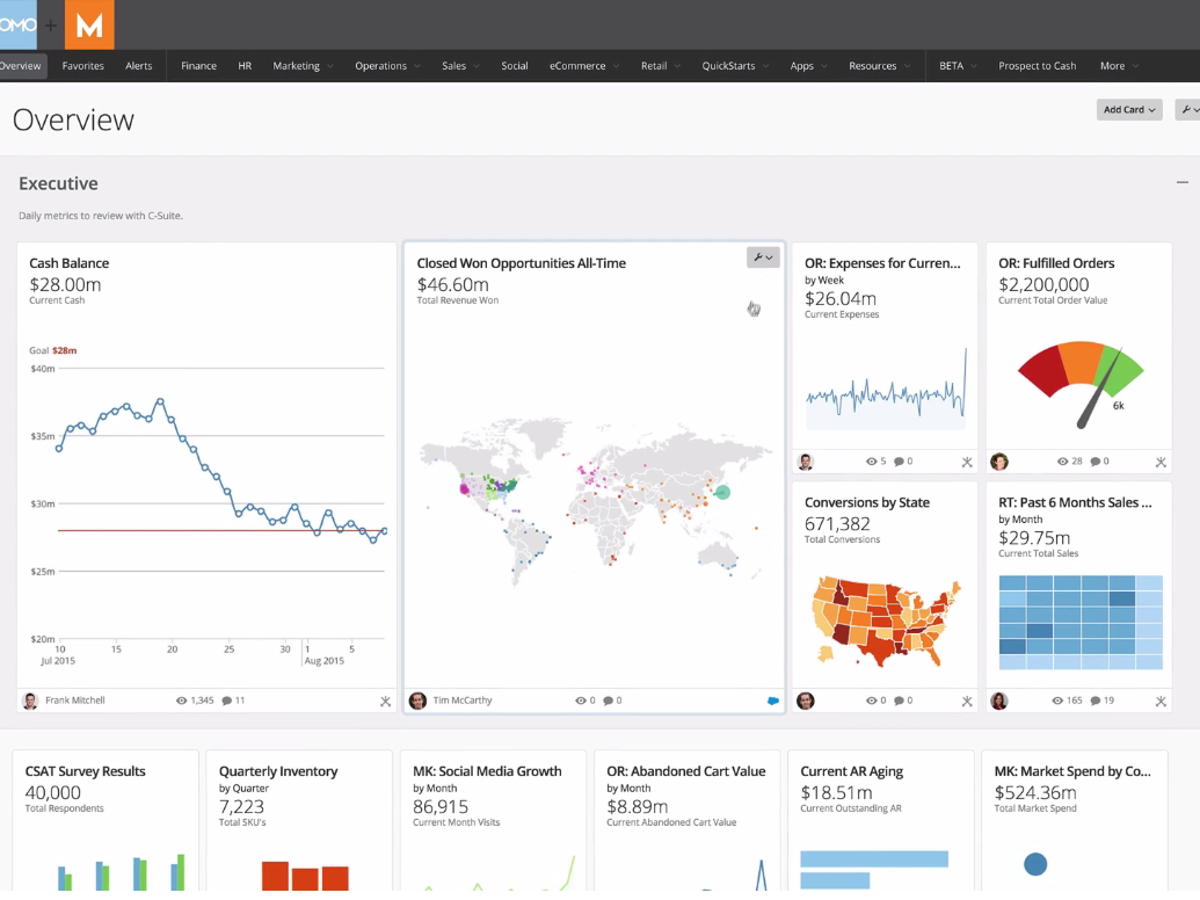 A typical dashboard in Domo.

First, the similarities. Domo and Power BI share most of the same features. Sure, there are some things that one tool has that the other doesn't; for instance, Power BI doesn't feature box plots as a standard data visualization, while Domo does. In general, however, their feature set is pretty similar.

Power BI is one of the major exceptions. Power BI is sold by Microsoft. Not only can Power BI better communicate with other software built on Microsoft's foundations, it's also available as part of some Microsoft Office packages. Businesses that use Microsoft Office might already have access to Power BI. Some powerful, ubiquitous apps like Microsoft Azure, Word, Excel, and PowerPoint integrate natively with Power BI.

Domo may not have native integration with any Microsoft software solutions, but it does have thousands of different connectors to software both common and obscure. Domo can connect to pretty much any tool that a business would want to use with it. Users can also build custom integrations on top of Domo and share these custom integrations with others, a feature that Power BI doesn't have.

In short, Power BI is a good fit for those who have already bought into Microsoft's product ecosystem, but businesses that use software from many different vendors will be better served by Domo, at least in terms of data connection. 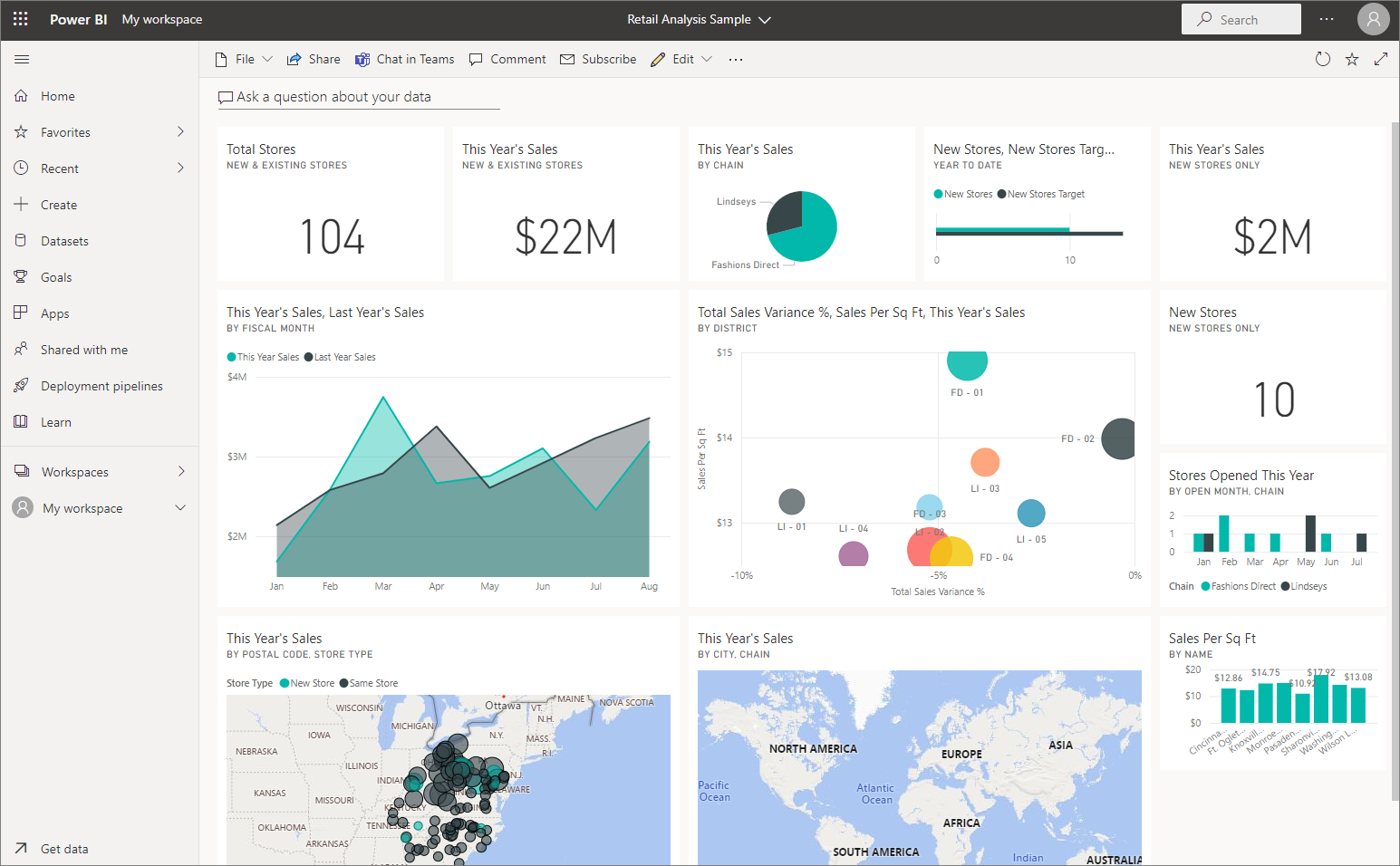 There's a lot of Microsoft Office in Power BI's DNA.

Domo is one of the most user-friendly, self-service tools in the industry. The whole tool has been designed from the ground up to be a low-code or no-code solution for businesses without a lot of technical resources. Many Domo users feel that the tool is intuitively designed; many features that would require more technical knowledge in another tool can be done easily without that knowledge in Domo.

One particular feature of Domo's to note is its dashboarding and data visualization tools. These tools are specifically built to help the average employee to build out dashboards for their own tasks, without involving anyone with more technical expertise. Domo's dashboarding tools are some of the most user-friendly in the industry. 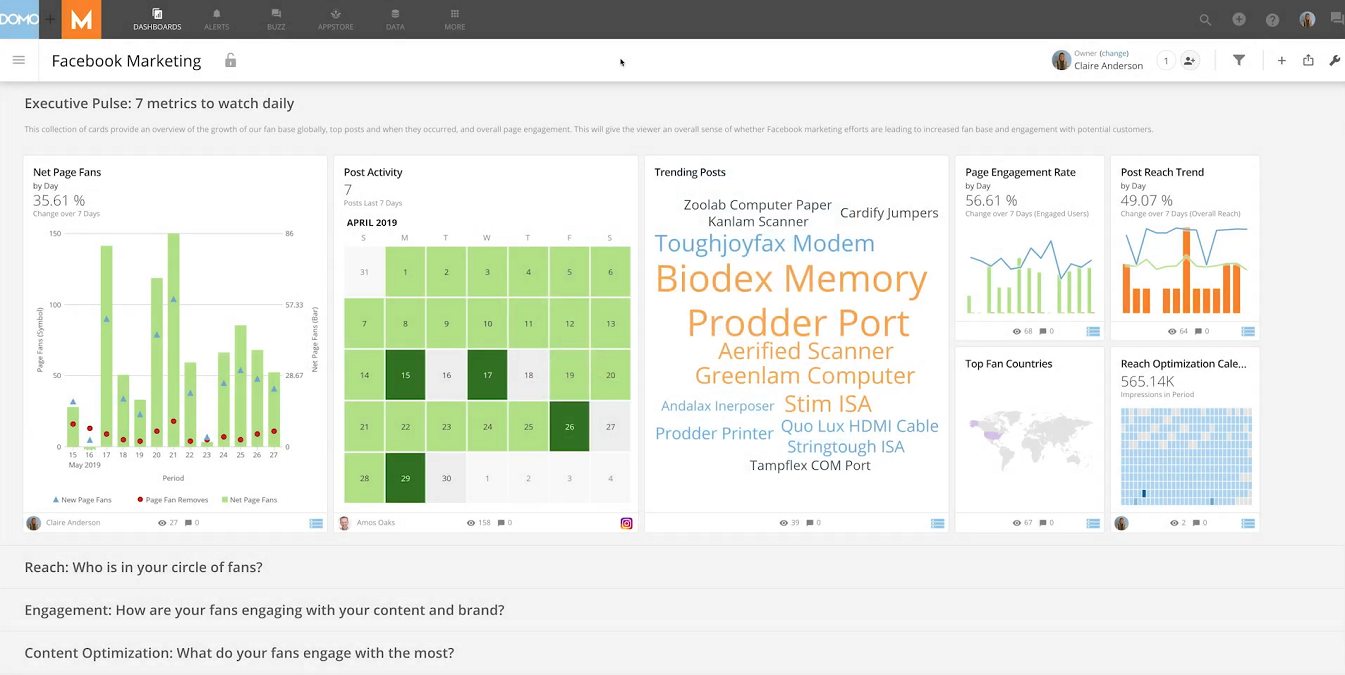 Domo offers its users a ton of potential.

However, Domo does have some flaws. Some technical-minded users feel that its approach towards user-friendliness comes at the cost of too much abstraction. Technical staff can't really get into the guts of Domo to mess with their data on a deeper level, which some companies have an issue with.

Domo can also be less transparent if things go wrong. Since the software relies on a lot of its more complex operations just working so that the average employee doesn't have to mess with them, there's more potential for delays or interruptions if things go wrong. If a problem does crop up, it's more likely that the user will need Domo support staff to help them fix it, rather than being able to fix it themselves.

Power BI, on the other hand, has a reputation as one of the least intuitive tools in the BI space. Reviews of the tool on sites like Reddit, Capterra, and G2 are filled with users describing how difficult it can be to do certain tasks in Power BI, tasks that are much simpler to perform.

To be fair, Power BI is not some fiendishly difficult, actively unhelpful piece of software. It's just less polished in a lot of ways compared to its competitors. It uses a lot of the same design building blocks as other Microsoft tools like Word or Excel, and anyone who's ever used Word or Excel knows that they're not necessarily badly designed tools, they just make some simple things harder than they need to be. Power BI is the same way.

For example, Power BI's data visualization tools are underpowered in the cloud-based version. If a user wants to build a complex data visualization in Power BI, they often have to export things back and forth from the cloud-based web app to the more fully featured desktop app. It's not something that's a dealbreaker, it's just a common pain point among users of the tool.

However, Power BI does allow users to do more on a code level than Domo does. More technically-minded users will have an easier time connecting with the tool on a code level, since Power BI makes its technical aspects more apparent. Of course, this is because Power BI requires its users to know at least a little bit of code to understand and utilize its more complex features. 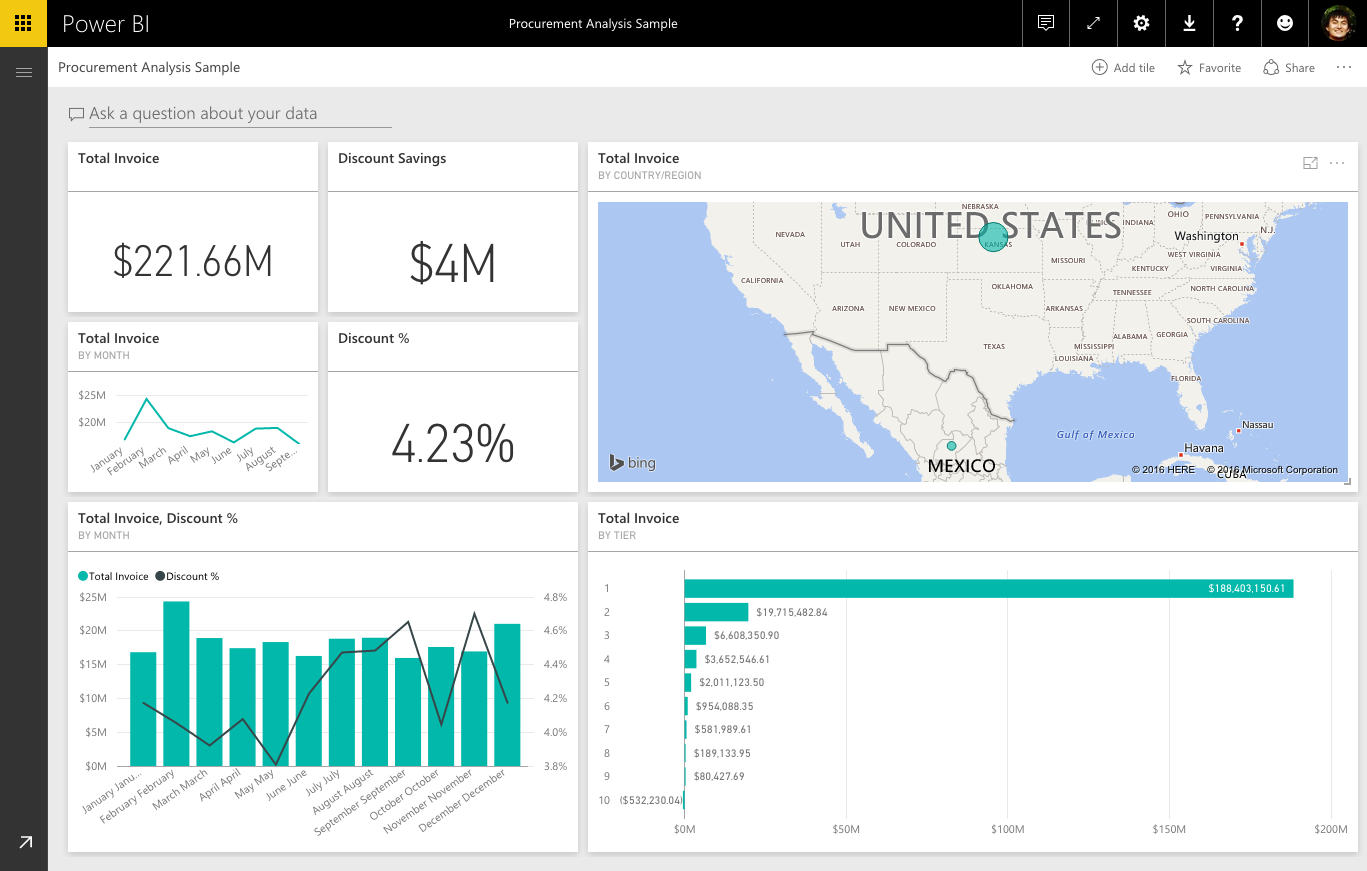 Domo doesn't have flat rates for any of its services; each company that wants to buy a Domo license will need to negotiate their own rates with Domo as part of the purchasing process. These rates are based on the business's use case for Domo; a large business that wants to use Domo as part of an embedded analytic solution will end up paying more per seat than a smaller business that only wants to use basic Domo features.

This pricing structure is fairly common in the BI space. They allow vendors like Domo to tailor their rates to their customers, so that larger customers with more complex plans for Domo will pay more than smaller, less demanding customers. However, this process does take a lot of bargaining power away from potential customers; they have no idea how much their implementation of Domo 'should' cost.

It can be hard to find exact figures on how much a given Domo implementation should cost, but most agree that Domo's prices are on the more expensive side among BI companies. Domo is a robust, best-of-breed tool, and businesses often need to pay a premium to access its tools.

For many businesses, Power BI's user-unfriendliness and lack of integrations are the price they pay for getting a powerful, robust BI tool so cheaply. Power BI has a lot of pain points compared to Domo, but it's available for a fraction of the price. 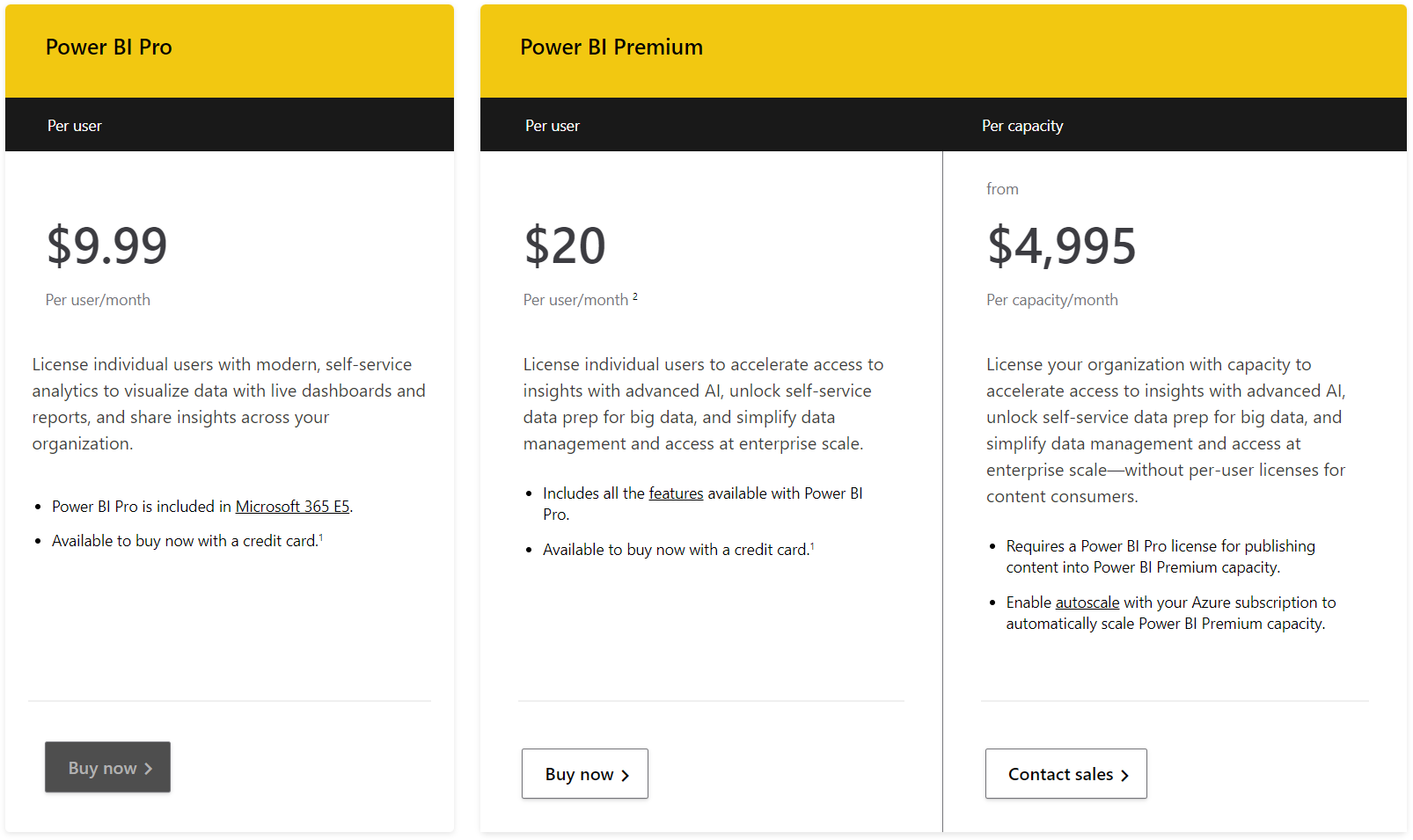 In conclusion, both Power BI and Domo are robust, powerful BI tools that have captured large portions of the BI market. Both tools have much of the same features, and those looking for a fully featured BI solution won't be disappointed by either vendor.

Domo is a much more user-focused, self-service, intuitive tool, and it integrates with more non-Microsoft tools than Power BI. However, its powerful, simple suite of tools can come at a higher cost than some of its competitors.

Power BI is much less user-friendly than Domo; in fact, it's one of the least intuitive BI tools on the market. However, its low price and native integrations with other tools in the Microsoft ecosystem make it a great choice for those that use a lot of Microsoft software or who are looking for a BI bargain.