Domo vs. Tableau: Which is better?

Tableau and Domo look pretty similar on the surface. Both are self-service BI tools, meaning that they don't need data scientists or IT personnel to use their basic tools. The average employee can use a tool like Domo or Tableau to do their data work, without much in the way of data experience.

In general, Domo's tools are more simplified and easier to navigate, while Tableau's tools are a bit more complicated and give more detail about the data that's being analyzed. Data novices will generally prefer Domo, while those with some data experience might prefer Tableau.

Salesforce, one of the largest CRM companies on the market, recently bought Tableau. Tableau is now a Salesforce tool, if not by name. Since they're owned by Salesforce, Tableau can offer robust, native integrations with other Salesforce tools, like Sales Cloud and Slack, that Domo doesn't have.

Both pieces of software have thousands of different visualizations, and both are designed with the end user in mind. Users might have a bit more customizability in Domo, but for the most part, the visualization suites are both robust and powerful. Read our full ranking of data visualization software here.

Here's an average Domo dashboard compared to an average Tableau dashboard. Both have the same kinds of visualizations, like maps, charts, and graphs. Domo's dashboards tend to be a bit nicer to look at out of the box, and don't require much tweaking to look pretty good, while Tableau's dashboards are more functional and require some effort to look nice, though it's not completely impossible to do so.

Read our full report of the best dashboarding tools here.

Domo and Tableau both have a very similar suite of ad-hoc analytics tools. Both pieces of software make it very easy to build out new reports and dashboards without involving other users or IT.

Both tools also have powerful data discovery tools, like visual analytics, drill-down capability, and dashboard interactivity. These features are essential for any self-service BI tool, since they allow users to take more of an active role in analyzing their data.

Here, we see Magic ETL and Tableau Prep next to each other. Domo's tool is a bit cleaner and simplified, while Tableau's tool gives the end user more information about their data as they build. In practice, the process of actually using the tool is fairly similar. Data preparation is not an area where Domo and Tableau are too different from each other.

Businesses need their employees to be able to handle data themselves. In legacy BI systems, data preparation and transformation was one of the hardest parts of the data pipeline. Data experts had to carefully manage their data to turn it into something useful. With tools like Domo and Tableau, much of the hard work is done automatically. With intuitive drag-and-drop workflows, users can easily build out complex transformations without much technical experience.

For a full ranking of data transformation tools, click here.

The rest of Domo and Tableau's data analysis tools are fairly similar. There are a few features here and there that one tool has and the other doesn't, but in general, they've got mostly the same feature set and can do mostly the same things. Again, Domo's tools are usually more simplified and intuitive, while Tableau's tools expect a bit more from their user.

Domo and Tableau both have advanced analytical tools like machine learning and qualitative data analysis. Domo's versions of these tools are much easier for the average person to use than Tableau's, while Tableau's versions will appeal to a data expert who has more knowledge of the code that underlies the software.

Tableau allows for more interaction with data at the code level, while Domo tends to have a few additional layers of abstraction between the end user and the code that drives their analytics. Domo users can still mess around in their code with custom queries in R, Python, or other query languages, but those features are slightly easier to access in Tableau.

One major strength of Domo over Tableau is Domo's app ecosystem. Not only can businesses build on top of Domo to add further functionality to the software, they can share their apps with other Domo users. Apps exist for many simple analytics, so users can often skip most of the actual work of implementing a new analytic just by downloading an app from Domo's app store. 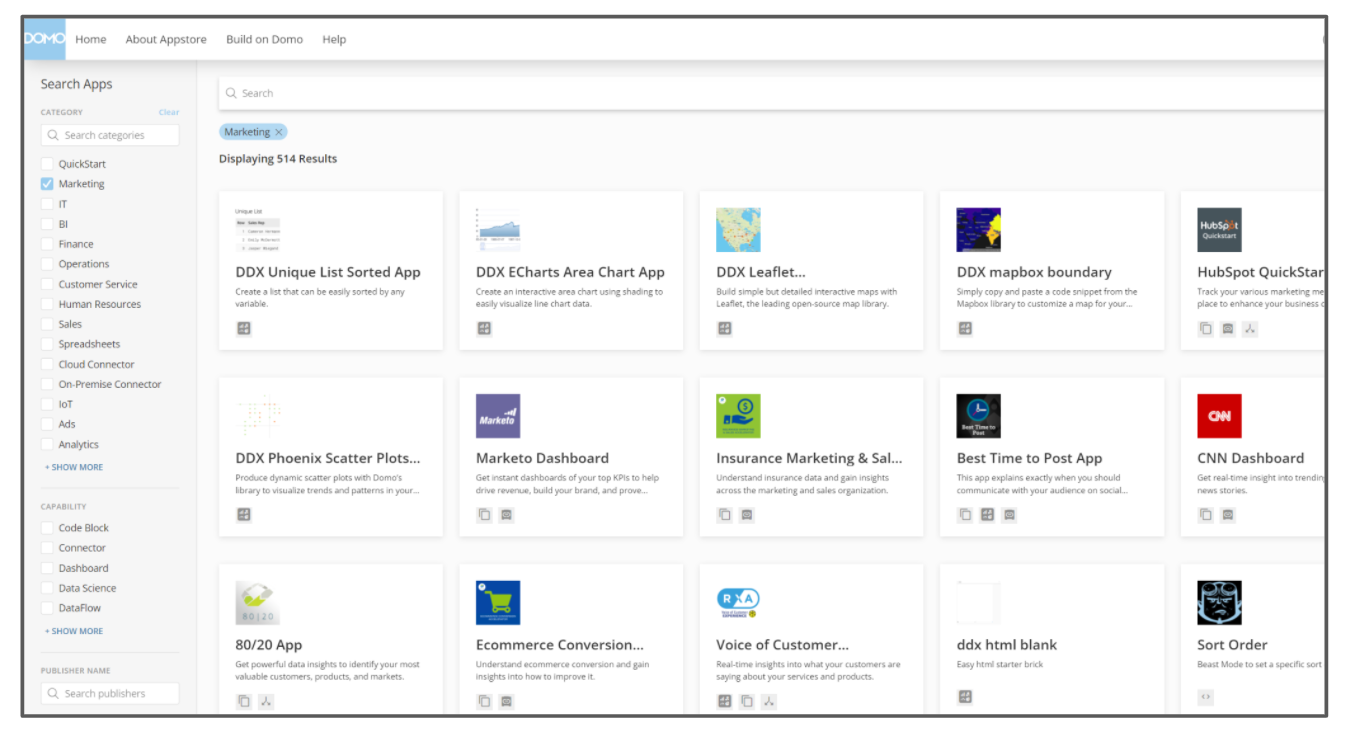 This is what Domo's app store looks like. Domo says it has thousands of different apps for any number of different purposes. Tableau doesn't have anything like Domo's app support. This is one of the reasons that many experts believe that Domo is an easier-to-use BI tool than Tableau.

Both Domo and Tableau have some additional features that aren't technically business intelligence features, but can help businesses do their BI tasks more efficiently. These tools shouldn't be the only reason that someone chooses one tool over another, but they are nice to have.

Tableau has an in-built CRM feature. On most Tableau plans, this feature costs extra; but, since Tableau has native integration with Salesforce, Tableau's CRM suite is actually very powerful. It's great for businesses that want native CRM insights while operating their regular BI tool.

One last major difference between Domo and Tableau is their pricing structure. Domo uses a variable pricing structure, meaning that every business has to negotiate separate pricing with Domo's sales. This pricing structure lets Domo tailor prices exactly to a business's budget and use case, helping businesses to fit Domo easier into their budgets, but some say this structure is too opaque and doesn't let businesses really shop around. For more about Domo's pricing, read our full report here.

Tableau offers flat rates for their services. Each of their different service tiers are a set price, which means businesses can figure out far in advance how much a Tableau implementation might cost them. This approach is more transparent than a variable pricing structure, but it isn't as flexible. Businesses are stuck paying the price that Tableau advertises and can't negotiate anything lower, or pay more for additional support. For more about Tableau's pricing, read our full report here.

In general, Domo and Tableau are fairly similar tools. They may look visually different, but they have most of the same features in terms of data analytics. Domo tends to be easier to use, while Tableau allows for more interaction at the code level. Domo is a completely cloud-based and cloud-native solution, while Tableau has on-premise options. Tableau has more transparent pricing, while every business has to negotiate their own price with Domo. Domo offers an app store for additional user-build functionality, something that Tableau doesn't offer.

For a no-cost consultation with our team of experts, reach out today. They'll connect you with the BI tool that best fits your needs and use case. Fill out a form here, and they'll get back to you as soon as they can.